FRESCOES IN CATHEDRAL OF CENEDA

On the outside wall, behind the arcades of the loggia, there are three frescoes executed by Pomponio Amalteo on drawings by Pordenone.

The first on the left is the Judgment of Daniel, the prophet who saved the caste Susanna from death. Unfortunately, the fresco has not been perfectly preserved; at the bottom you can see some heads while the rest is indecipherable. At the top, however, it is clearly visible the young girl who turns her gaze full of confidence to the sky while Daniel appears in the act of facing the judges and the elders of the people. At the sides of the procession, all are present at the windows and balconies to participate in the Judgment.

The Judgment of Solomon faces the right wall and tells the story of a wicked woman who asks the king, seated in the throne surrounded by guards and counselors, to cut off his head to what his child says. But the king, knowing the true mother, orders that he be returned to her. Unfortunately, even for this fresco, conservation is not excellent. The center, in fact, has disappeared, we can only notice some people on the sides.

Trajan’s judgment, better preserved than the previous ones, is in the middle. Pomponio Amalteo, there, tells the story of the son of the emperor who, riding through the streets of Rome, trampled and killed the son of a poor woman. The mother, with the child dead in her womb, is represented in the act of awaiting the passage of the emperor to ask for justice. Legend has it that Trajan called his son and told him: “you killed his only son. Now you will take your place and from this moment you will look at her as if she were your mother. ” Under the fresco, an inscription in Italian reads: “This image, a directing and work of piety, an indication of the true scholar, teaches to follow her and to stay away from impious things”. 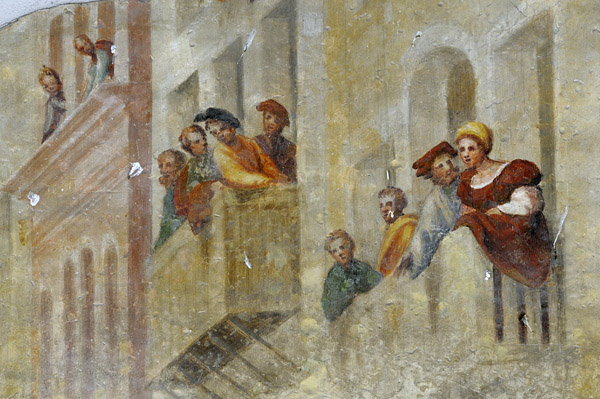 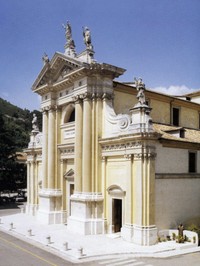