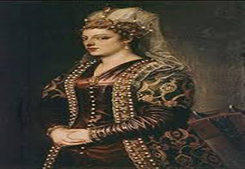 Caterina Cornaro (1454-1510), daughter of the Venetian patrician Marco Cornaro and Fiorenza Crispo, belonged to one of the richest and most influential families of the patriciate of the Serenissima, the Corner.

Educated in the monastery, at 14 years of age she was given in marriage to James II Lusignan, king of Cyprus and Armenia, but the union with the groom was delayed for four years (1472).After renouncing the throne of Cyprus, Caterina Cornaro was created madam Aceli, lady of Asolo, but also retaining the title and rank of queen in official documents.Caterina arrived in her golden exile of Asolo on October 11, 1489. As a lady, she had on Asolo and on all her territory an effective domain of mere et mixto imperio et gladii quacumque and homage to the potestate, as before it belonged to the Signoria.Caterina recalled to her court artists and writers, including Giorgione, Lorenzo Lotto, Pietro Bembo. Artists and rulers flocked to his court, men of power and culture spreading an atmosphere never before breathed in the city.His palace was still called Castello di Regina Cornaro, just above the village, where Caterina intrigued and fascinated anyone, as Eleonora Duse did many years later, to whom the theater is dedicated, built in the central space of the building.

In 1509, following the invasion by the troops of the League of Cambrai of the Asolo territory, Caterina Cornaro took refuge in Venice, where she died the following year.