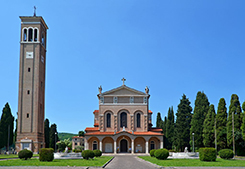 It has very ancient origins (VIII-IX century) and right from the beginning was tied to the Benedictines who lived at the church of Santa Maria Maggiore in Treviso. The Church was built by the architect Fausto Scudo following the destruction caused by a cyclone on July 24th, 1930; the Millenary Church possesses an Artistic Heritage of indescribable value. The current Church is located in Via Schiavonesca, while the former one was at the base of Montello. The building has a Latin-Cross design, with a single nave that is crossed by the transept, the walls and the ceilings are decorated with stucco. Along the walls are exposed various paintings of the Venetian school, in particular a Crucifixion of Tintoretto and a Madonna with Child by Paolo Veneziano. The high altar comes from the Church of San Secondo in Isola, while the altarpiece was located in Montello. The side altars are of Venetian origin. Externally it has a large atrium marked by rounded arches supported by columns, which is accessed through a stairway. At the top there are three large windows, framed by blind arches resting on pilasters. Finally, the building ends with a gable supported by an architrave, composed by four statues of saints.

Audio for Church of San Silvestro