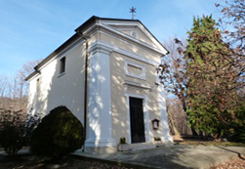 The small church of San Martino dates back to the 6th century and was the religious center of Volpago when the town was still confined to the woods. Over the centuries, this building was periodically abandoned, in fact in 1592, when they outlined the boundaries of the woods it was completely abandoned. The traditional Procession, held in honor of the Patron Saint, did not take place any more, and in 1647 the Sacredness of the Church was taken away. In 1800 Matilde Spineda and the municipality of Volpago financed a restoration and the church was solemnly inaugurated on November 11th, 1895. In June 1922, the church was closed for two years because some Republicans, who had gone into the woods to commemorate their fallen soldiers in Montello, had entered to find shelter from the rain and may have caused some damage. In 1986 the church was restored again and to this day it seems to have regained the devotion of the citizens that every November 11th gather to celebrate the Via Crucis of San Martino, inaugurated in 2007 in memory of the victims of this very road. During this commemoration, you can hear verses written by Cardinal Ratzinger (later Pope Benedict XVI) in the last year of John Paul II’s life. The walk takes about 30 minutes and despite some slope it is ideal for the whole family. In front of the Church there is a bell that can be rung freely by each pilgrim that visits.