CICLE OF THE DOMINICANS

The Dominican cycle, which represents forty famous figures of the Dominican Order, was commissioned by the Dominicans themselves in 1351 and was completed in 1352. Starting from the right side of the crucifixion are depicted: Pope Innocent V, Pope Benedict XI, Cardinal Hugh of Provence, in the south wall there are numerous cardinals as Cardinal Annibaldo degli Annibaldi, Peter of Tarantasia or Robert of England.On the north wall there is a representation of the friars and on the left of the crucifix are depicted San Domenico, San Pietro Martire and San Tomaso d’Aquino. The Dominicans depicted inside their cells, all converging towards the scene of the Crucifixion to underline its profoundness meaning, they are all cultured at the typical activities of the scholar like meditation and study . The cell consists of two wooden parts welded together with one to the desk, which has an inverted perspective and the other to the seat ; they are also characterized by the presence of a curtain that serves as an expedient to the artist to obtain the third dimension using color rather than perspective means. 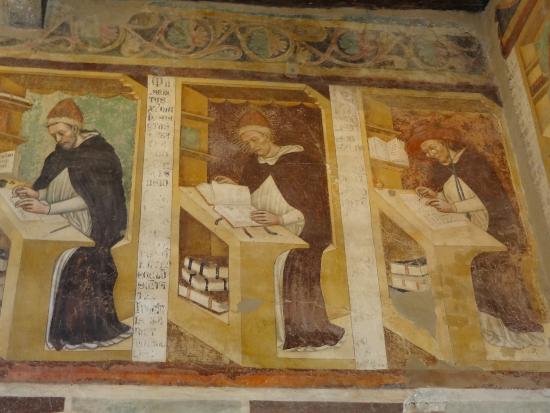