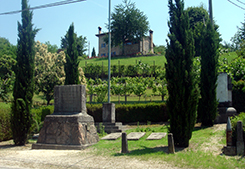 The memorial stone, located at via Nord Montello 12 in Volpago, commemorates the “Arditi” of the 1st Division, (a special Army Infantry Corps) who died in November 1918 while building three bridges for the counterattack that would have brought the downfall of the Austro-Hungarian Empire. Among them is Lieutenant Giuseppe Barone, who fell in 1918 while trying to pass the River.
The Memorial Stone has recently been restored, thanks to the Santa Mama Committee.

Audio for Memorial Stone of Arditi