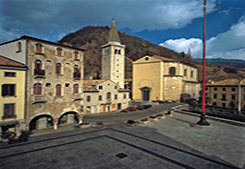 The Cathedral dedicated to Santa Maria Nova, stands on the original church, maybe existing from 1300 and was completed in 1779 on a plan by the architect Domenico Schiavi da Tolmezzo.  Inside keeps many works of art. Tiziano Vecellio made the most important one, the altarpiece called Madonna in Gloria con il bambino, commissioned in 1542 by Serravalle’s community to the painter. Behind the Dome, we see now a monumental stair standing where the ancient gate “Porta del Terraglio” was located. The gate was unfortunately demolished in 1931. Following the stair we can reach the Sanctuary of Santa Augusta. From the Dome, following the river Meschio, we can see the Meschietti, a real water project built after the overflow of 16 October 1521 due to a landslide. As a testimony of the episode, you can see some palaces with buried columns.