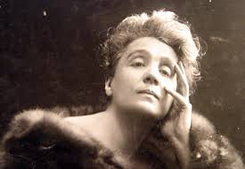 Definitely called the greatest stage actress of all time, Eleonora Duse was a “myth” of Italian theater: between the late nineteenth and early twentieth century. Born October 3, 1858 in a hotel room in Vigevano (Pavia) where the mother, a wandering actress, stopped to give birth, Eleonora Duse does not attend a school, but at four she is already on the stage: to make her cry, as required part, someone behind the scenes hits her on the legs.

At the age of twelve years she replaced her sick mother in the roles of protagonist of the “Francesca da Rimini” of Pellico, and of the “Pia dé Tolomei” of Marenco.

He died due to pneumonia during a long tour in the United States, at the age of sixty-five, on April 21, 1924 in Pittsburgh. As you requested, his burial is located in the cemetery of Sant’Anna in Asolo, a small town where he had a home in which he often resided.

she wrote that he wanted to be buried facing Monte Grappa, for the love of Italy and the soldiers she had witnessed during the First World War. The Civic Museum of Asolo preserves and exhibits portraits and autograph letters of the actress, objects, books and personal furnishings, clothes and stage footwear, which in 1933 the daughter Enrichetta Angelica Marchetti Bullogh donated to the Italian State, binding them to the town.

Many other letters written and received, books, scripts – some autographs of the actress or author of the text -, clothes, furniture and many personal belongings were donated in 1968 by his nephew and last heir Eleonora Ilaria Bullough, an English Dominican religious with the name of sister Mary of St. Mark, at the Giorgio Cini Foundation in Venice, where they make up the Archivio Duse and the exhibition space Stanza di Eleonora Duse, the most extensive and complete collection of documents on the life and art of the actress.