FLAGELLATION AND CHRIST IN FRONT OF PILATO

The frescoes that still adorn the left wall and the counter-façade of the Church of S. Martino in Colle Umberto, are the work of Francesco da Milano. Initially they were attributed by Quesrini to Pomponio Amalteo, but twenty years later Mauro Lucco confirmed the paternity of Da Milan thanks to some documents of the Luminaria. On the counter-façade there is the “Flagellation”, while on the left side there is the fresco “Christ in from of Pilato”. These works were made in an advanced stage of the artist’s production when his art opens to greater inventiveness and compositional freedom. 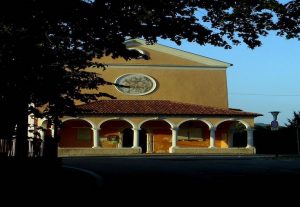