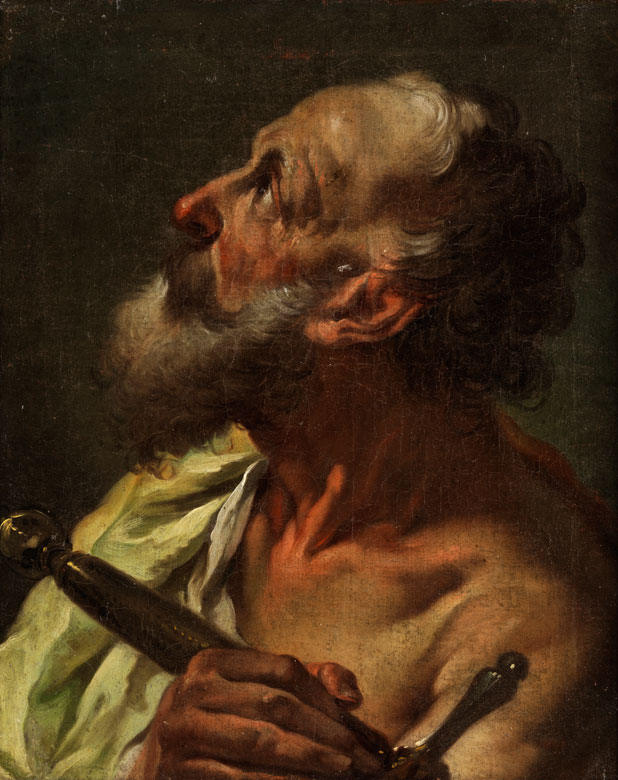 Francesco Salvatore Fontebasso was born in Venice in 1707 and was one of the leading exponents of Venetian painting in the rococo period. Trained in Sebastiano Ricci’s workshop, his painting was strongly influenced by that of Tiepolo, as many of his works testify, and he was considered one of the last exponents of the eighteenth-century Venetian monumental style.

Fontebasso is one of those “traveling painters” and, after a brief stay in Rome, he returned to his hometown in 1728, making a stop in Bologna. The influence of the Bolognese school is recognizable in his early autonomous works, such as the “Adoration of the shepherds” of 1732 in the church of San Martino a Burano. Around 1730 he was in Udine, where he studied the frescoes by Tiepolo in the cathedral and in the Palace of the patriarchs.

Around 1740 the Fontebasso Formation was now complete and in his best works he managed to merge in a personal style the teaching of Ricci in light and vibrant colors, with a dense body plasticism and a solid architectural-perspective structure incorporated in his travels. . Moreover, the desire to approach the novelties of Tiepolo pushed him in search of spatial visions of aerial lightness on which the perception of shapes and matter will prevail.

The first important work of Fontebasso in Venice was the fresco decoration of the Jesuit church commissioned in the early 1930s by the Manin family, where he depicted the Apparition of the angels to Abraham and Elijah taken to  heaven.

On the commission of the Venetian lawyer Sebastiano Uccelli, around the middle of the eighteenth century, in Santa Bona di Treviso he painted the walls of the ballroom in the barchessa of Ca ‘Zenobio, as well as other  rooms of the villa.

Like other Venetian painters of the period, after working between Venice, Padua and Treviso, between 1761 and 1762 he went to St. Petersburg at the invitation of Tsarina Catherine II where he remained two years. In the Russian city he carried out  numerous decorations for the imperial palaces, but he also painted portraits and genre paintings. Although he had received the honour of being appointed professor at the Imperial Academy of the Arts, he preferred to return to Venice where in 1768 he was appointed president of the Academy.

The paintings by Francesco Fontebasso, depict two events taken from the Old Testament. The first is the “Victory of Joshua on the Amalekites”, and deals with the propitiatory prayer for the victory of Joshua against Amalek. According to the sacred text, Moses went up into the hills with Aaron and Cur, raised his hands in the gesture of prayer, and the people of Israel won, as soon as he had let them fall out of exhaustion, the enemy had the upper hand. So it was that Aaron and Cur supported Moses on a rock and, together, helped him support his arms.

The second painting instead depicts “Moses and the bronze snake”. One of the many dangers during the march of Israel in the Sinai desert were the poisonous snakes that nestled among the rocks. The raising of a bronze snake by Moses, was almost a sort of antidote and votive offering : it is interesting to note that in Timna, in the mining region of Arabia, in the northern Sinaitic area, small copper serpents metal that abounded there , which probably had the function of magical protection from those poisonous reptiles that infested the steppe were discrovered by archaeologists.

The biblical narration emphasizes that the liberation from death by poisoning occurred only if one “looked” at the raised serpent, that is, if one had a look of faith towards that “symbol of salvation”.

In these works of the Fontebasso seems to be inspired by his own creations re-proposed with variations, and precisely to the Trentino cycle he made in the extreme phase of the master’s activity. These are the years when Fontebasso perceives the attraction for the landscape spaces full of luminosity where the pictorial dough is diminished in touches of light. For these paintings a chronological collocation can be made between 1733 and 1735, when Fontebasso conforms, as some critics wrote, “to the Tepelian decorative taste, freeing itself from any quadratic structure and focusing on the effect of the figural episodes projected by the sub ‘up to the bright sky, with a resentful play of plastic turning’: a few times he has achieved an inventive happiness of rococo brio and at the same time of limpidity of colour, as in these paintings. But these two tests are also a testimony to them.

At first glance, the paintings show an uncommon technical knowledge: in terms of size and spreading speed, it is a model in which the figures are safely placed in a palette of sophisticated colours.

With delicate chromatic fineness, the painting shows all the light transparencies and the virtuosic transitions of which the best interpreters of the eighteenth-century Venetian tradition were capable. Francesco Fontebasso, one of the main followers of Sebastiano Ricci and, later on, for the full adherence to the rococo taste of one of the main schools, the Venetian one, of the European figurative civilization.

These paintings here are exuberant, he has been able to capture the turning of a decorative sensitivity in a completely autonomous language, instead, as regarding their belonging to the parish church of Selva del Montello, the inscription emerged during the restoration on the Moses the cliff striking , (plate VII-X) which attests as this canvas, and therefore the others, was donated in 1819 by Francesco Petropoli, exponent of a family of Venetian merchants who had long been their residence with adjoining oratory in that of Selva. Petropolis may have come into possession of such paintings for purchase in the  conjuncture that followed the Napoleonic suppressions of religious institutions, wher  it was obvious that an incredible number of works of art, coming mainly from places of worship or from venies of the brotherhood were placed on the market. The quantity and quality of the works acquired in a short time for the parish church of Selva is therefore truly surprising, while even through this report one is shocked to think how devastated the artistic heritage in Venice was at that time . In fact, in this period, many churches were enriched with works of art often purchased at low prices, because at the time considered minor authors, rediscovered and re-evaluated only with the twentieth century criticism.