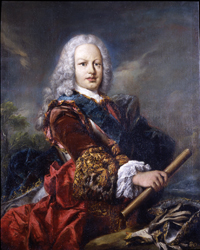 The rococo painter of the Venetian school Gianantonio Guardi was born in Vienna in 1699 and his first training took place at his father’s workshop, Domenico Guardi. After his father’s death, Gianantonio, only seventeen years old, resumed his studies in Venice together with his two brothers, both artists, Francesco and Niccolò. His painting is based on paintings of religious subjects, genre scenes, and copies of previous masters. From 1730 he received commissions especially from the German Johann Matthias von der Schulenburg Graf, Marshal of the Venetian armies and painted for him numerous copies of Venetian masters, such as Titian, Tintoretto, Sebastiano Ricci and others, besides portraying many ruling families of Europe. In 1756 he became a founding member of the Academy of Venice and most of the scholars believe Gianantonio Guardi the main architect of the famous historical paintings depicting “Tobia on the pergamum” in the church of Raffaele Angelo in Venice in 1750. If you consider this work as his, it would be the ransom for Giantantonio, who could be considered one of the most important painters of the Venetian rococò. Giantantonio Guardi, after having traveled and operated throughout Europe, as was characteristic of the Venetian painters of the period, died in the lagoon city in 1760. The works of Gianantonio Guardi are placed here along the southern wall of the transept, on the right we observe “Mosè Bambino tramples the crown of the pharaoh”, while on the left “La verga di Aronne turned into a snake”. As for the artist’s life, even for these works few and few are the indications that are added to only some data of the Superintendency for Artistic and Historical Heritage of the Veneto, which would allow to reconstruct the recent history of the pictorial cycle of Selva. Like Francesco, Gianantonio also chooses this time, for his cycle dedicated to the patriarch Moses, rococo models of current events and international fashion in the Venice of the period. The paintings depicting Stories of Moses, compose a thematically narrative cycle and a vast monumental breath perhaps even more widespread, to which more authors have contributed. The original destination remains unknown; information on the various passages concerning the provenance of these works is lacking, while the way in which they were drilled was finally given to the parish church of Selva only during the nineteenth century. It should be considered that their paternity makes it highly probable that they originally belonged to Venice, where the iconographic themes related to the figure of Mosè find their first fortune in the Tintoretto cycles and, for what concerns them, they were renewed during the eighteenth century. In the paintings of Tiepolo and Ricci of 1720 for the church of Santissimi Cosma and Damiano alla Giudecca, and in the large paintings by Tiepolo for Verolanuova of the beginning of 1740. The importance of the cult of Moses in Venice is also underlined by the imposing monument like the church of San Mosè.