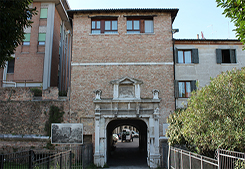 The Porta Altinia, chronologically, was the first of the three gates to be built, in 1514, by the mayor Sebastiano Moro, erected in the direction of Venice and the ancient Roman Altinum. Different from the other two, it preserves the severe aspect of the fourteenth-century tower-door. On the inside it is almost imperceptible the presence of a gateway to the city: it seems rather a residential building. On the external façade, on the other hand, the tower is completely visible, made of exposed bricks and with the string-course in stone that identifies the original presence of a terrace for the defense of the entrance. The stone portal occupies almost entirely the width of the façade and is surrounded by two light pillars, flanked by two coats of arms and supporting an entablature above which the winged lion stood as a symbol of submission to the Serenissima.

The most majestic and elegant port of Treviso was built in 1518 in just 10 months by the mayor Paolo Nani, who wanted to call it Porta Nana. But the Venetian Senate, not admitting self-congratulations imposed on the mayor of Treviso to dedicate the door to the Archbishop of Canterbury San Thomas Becket, from the name of a medieval church facing the walls. The mayor as a stratagem, had the statue of St. Paul, his namesake erected on the top.On the outside, above the central arch, is written in the vernacular, while on the arch facing the city, the same inscription is reported in Latin language, to emphasize the difference between the aristocratic culture of the center and the countryside. The richly decorated Istrian stone door with a central arch, modeled after the Roman triumphal arch, recalls the Republic’s victory over the League of Cambrai.

Porta S.S Quaranta was erected in 1517 under the podestà Nicolò Vendramin. The façade is in Istrian stone, sober and linear. Outside on the central arch, is written in the vernacular, while on the arc facing the city, the same inscription is reported in Latin, to emphasize the difference between the aristocratic culture of the center and the countryside. The interior bas-relief of San Liberale comes from the medieval gate that was more inhabited. Above the arch, the winged lion of 1909. The dedication to the Forty Saints refers to an episode: forty Christian soldiers in 320, during the persecution of Licinius in Armenia, refusing to recognize the idols were sifted and then burned.