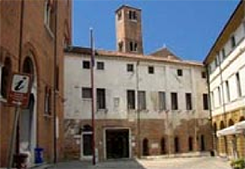 Monte di Pietà Connected by an underpass in the Palazzo del Podesta in Piazza dei Signori, Piazza del Monte di Pietà possessively guards a unique monumental complex that includes the ancient seat of Monte di Pietà and the churches of St. Vitus, St. Lucia and Santa Maria delle Carceri. Today, the ancient location of Monte di Pietà with its magnificent Chapel of the Rectors houses the offices of a bank and is not open to the public. It is instead possible to visit the two churches that, almost unknown to those who walk under the loggia in front, immerse you in the atmosphere of ancient times, in one of the most beautiful spaces in the whole city. Careful viewers will notice signs of numerous interventions and the various annexations and additions of different buildings that occurred over time; this area has always been one of the most important for the life of the city, featuring several buildings with civil and religious functions. Even before the year 1000, there was a hospital for pilgrims and the poor with a small chapel dedicated to St. Vitus. This was later expanded with the construction of a church in the thirteenth century. The city jail was located near the church that was destroyed by fire at the end of the fourteenth century and in its place, the Church of Santa Maria delle Carceri was built. Also towards the end of the fourteenth century, behind the apsidal wall of the two churches, Palazzo Pubblico was built; on the first floor, a room for City Council meetings was set up and in the one below, a church was consecrated to St. Lucia on December 13, 1389, in remembrance of the day when the Republic of Venice gained control of the government of Treviso. A century later, at the end of the fifteenth century, the rooms on the first floor were ceded to Monte di Pietà and in 1561, when the rooms of the institute were expanded, a restoration effort of the entire complex was undertaken resulting in the present structure. Monte di Pietà expanded on top of the church of St. Vitus; the latter was restored, the Romanesque bell tower was raised and a portico was built on the side of the Piazza San Vito. The seat of the ancient church of Santa Maria delle Carceri was used as a sacristy of the Church of St Vitus and his place of worship was moved inside the church of St. Lucia, in the Chapel of the Crucifix.