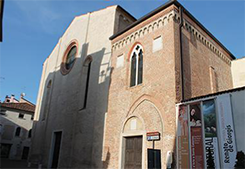 The construction of the Saint Catherine church and convent started at the beginning of 1346, during Andrea Cornaro’s magistracy. Nowadays it’s the headquarters of Treviso’s Civic Museum. It was on the side of the city used as a square for wood and was also where the Da Camino’s family had a palace, destroyed by the fury of the citizens in 1318.The Innocents chapel was added to the Saint Catherine complex to remember those sacrificed by Erode. It is thought that it was part of the pre-existing construction of the palace. Through history its uses changed multiple times. It was once the church of the convent for the servants of Mary, dedicated to Saint Catherine; it became the headquarters to other religious orders. Inside the church you can see important frescos by Tomaso da Modena, the most famous dates back to 1358, where Saint Catherine is depicted holding in her hand a model of the city of Treviso. Still visible today, the Latin words pronounced by the Saint interceding for the city salvation.The church suffered severe damage to the apse during the war of the League of Cambrai during the Renaissance.