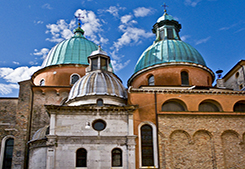 The Duomo of Treviso is a cathedral devoted to the apostle Saint Peter. The main area was built in the VI century. The diagram was designed in three naves, there are five domes on top of the central nave and two more cupolas on the chapels. The cathedral holds several important works by the artist Pordenone and a beautiful Annunciation by Tiziano.Adjacent to the church there is a baptistery, the bishopric, and the rectory (turned into a museum of sacred art). The author Giovanni Comisso defined the area as a “small Vatican”.The crypt apsis holds Saint Liberal’s ark, a roman soldier from the V century who turned Christian, and who is also the city patron and celebrated on 27th April. Recently the cathedral acquired a monumental organ, built to mark the Jubilee year in 2000. Fun fact: at the time that the bell tower was being built, the city of Venice opposed the construction of the Duomo’s tower because it couldn’t be taller than San Marco’s bell tower, this is why the tower is unfinished.