THE CRUCIFIXION OF SAINTS

The “Crucifixion of the Saints” by Jacopo Bassano was painted between 1561 and 1562. Commissioned by the nuns of the convent of San Paolo for the altarpiece of the church of the same name in Treviso, it is one of the artist’s most important paintings Due to the innumerable suppression by Napoleon, the painting was moved to the church of S. Teonisto in Casier in 1810. As in the previous work, also in this Jacopo refers to the Crucifixion by Tiziano (Ancona), using the graphics of Parmigianino and the brightness of Veronese. The imposing work is characterized by the light color and the use of bitumen and red and yellow lacquers used in glazing to obtain bright chromatic effects. The pyramid-shaped work presents the crucified Jesus at the top and at the base Mary, Magdalene and the saints John and Girolamo. Through the look and the position of the figures it is possible to pick up the pain and mercy that divide the work mainly in two phases. The first is described by the Virgin Mary with her hands clasped in prayer and her look soaked with pain. In the second, the pain is represented by Mary Magdalene, clinging to the cross as if she wanted to save Christ from a now certain death. John observes the fulfillment of the ancient prophecies without any torment in his face as he is aware of what is happening. The light coming from the bottom illuminates the characters, symbolizing the victory over death and the imminent resurrection of Christ. 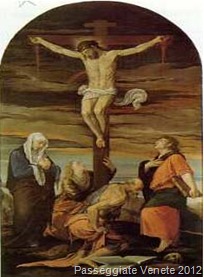