The work is the masterpiece of Bordone in Treviso. It is noted a particular commitment justified by the competence of the Rover family who had it executed for the altar of the family chapel in the Church of San Francesco.

Once the church was desecrated in 1797, the altarpiece was exposed in the large semicircular chapel of the nave of the cathedral of Treviso.

The altarpiece is built in areas: in the foreground the protagonists, the dear family with a shepherd in the center in pyramidal composition that has the head of St. Joseph, on the right a tender girl who brings two doves and a shepherd make symmetry to the patrons .

Behind the figures the large room of the hut seems to refer to the competitive form devised by Pordenone; two female characters, half hidden by architecture, are about to cross the rustic apolitica.

The classical construction, an arch between two columns on high decorated plinths as well as the group of angels in the sky resume the shovels of Milan.From the mountainous background on which are sketched with clear and transparent brush strokes figures of shepherds with flocks, advances the procession of the Magi. 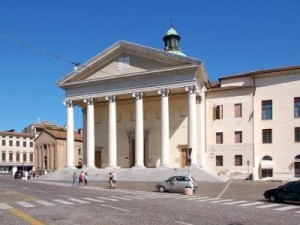