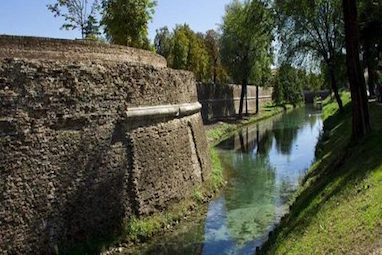 The ancient walls of Treviso appear in the Middle Ages and included thirteen doors, but already in Roman times the Municipium Tarvisio was protected by water and a defensive wall. In 1509, to avert the danger deriving from the Leg of Cambrai, established the year before by the European states in an anti Venetian function, Frà Giovanni Giocondo, a hydraulic and military engineer, was commissioned by the Serenissima to design the current walls, a masterpiece of bastion architecture. The walls, about five kilometers long, provided a system of locks to widen the surrounding plain and a thick wall, supported by an embankment, equipped with towers and gunboats, decorated with a continuous curb and coat of arms of Istrian stone. There were three monumental doors: Porta S.S Quaranta, Porta San Tomaso and Porta Altinia still well preserved today. Now the embankment of the walls is along an avenue lined with horse chestnuts, ideal for a bit of jogging, a walk with the dog or a romantic outing.