MADONNA WITH CHILD AND SEVEN SAINTS

The fresco depicting the Madonna with Child and Seven Saints is located in the Church of San Francesco in Treviso, precisely in the first chapel named Cappella Giacomelli to the left of the transept.The central group of the Madonna enthroned with four saints is characterized by the refined Gothic elegance due to the chromatic tones that reveal the Bolognese and Sienese matrices of Tomaso’s art. The other three saints were added later.The Madonna is very close in modeling and in the subtlety of the color to that of Sant’Agnese in San Nicolò, the Child with his vivacity recalls that of the Church of Santa Lucia.The saints depicted on the left are Antonio Abate, Caterina Stefano, Giovanni Battista; those on the right are Ludovico and Giacomo whose hand recalls that of Sant’Agnese and Cristoforo. 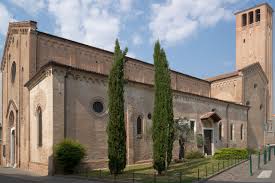