MARIA ASSUMED IN HEAVEN AND CROWNED AS A QUEEN

The altarpiece of Palma il Giovane, fallen into oblivion of human events, has returned to the parish of Ciano del Montello, above the high altar In the lower part of the work three male figures are represented: on the left there is St. Peter with the keys of Paradise in his left hand and with his gaze turned to the sky. The second figure is probably Don Giovanni Sebastiano-Brici Cammillotto, parish priest of Ciano from 1618 to 1643. The restoration has restored visibility to this figure by eliminating a layer of dark color wanted about in the nineteenth century (the reason remains unknown). On the lower right, instead, appears S. John the Baptist supporting the cross, his iconographic attribute. His right hand is pointing upwards to emphasize to the observer what is being done in heaven. The Virgin, instead, supported by a cloud flanked by two winged cherubs, is positioned in the middle of the blade. The woman is crowned by her son who embraces the cross, and by the Father with his head framed in a luminous triangle. Above them a dove symbolizes the Holy Spirit. t can be deduced on the basis that the animal is inscribed in a circle in which two other circumferences converge, symbolizing the Father and the Son: the Trinity therefore. 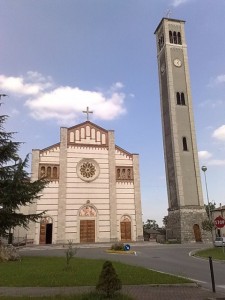