For the Martyrdom of St. Lorenzo there are two realizations: one dated 1571 and the other, later, dated 1490 ca. The first is located in the Church of the Madonna Assunta and San Martino Vescovo in Belluno and was created following a drawing by Titian that the artist draws from the altarpiece of the Jesuit church in Venice. Compared to the original model, however, the scene is not represented at night but during the day, while the poses and the attitudes of the figures, starting from that of the saint, are less emphatic and more composed. In this masterpiece Jacopo exploits types and models of figures used by him in other works sometimes with very different subjects. The second version, however, is located in the parish church of Poggiana di Riese (TV). This work is linked to the Tiziano model, from which also takes place the nocturnal setting. The traditional attribution to his son Francesco has been changed in favor of Jacopo in recent years, but is still debated. 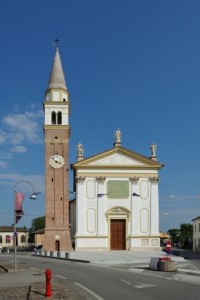