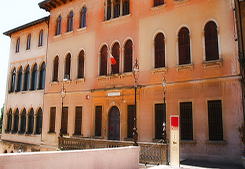 In addition to the Palazzo del Vescovado, the current Town Museum also occupies the  Loggia della Ragione built to house the representatives of the Town Council and the Magnificent Community of Asolo and was decorated with frescos around the middle of the sixteenth century. The first nucleus of the museum’s collections was formed at the beginning of the nineteenth century thanks to donations from Bartolomeo Fietta and, above all, from Domenico Manera and Giovan Battista Sartori Canova. At the end of the century, the museum was officially instituted, established in the then municipal hall of the Loggia della Ragione, and was gradually expanded in part as the result of bequests from Andrea Manera and Pacifico Scomazzetto. From the early twentieth century, donations became more and more frequent and considerably increased the artistic and historical items in the institute. Recent rearrangements house the Archaeological Section (Ground Floor), the Art Gallery  (first floor), the Caterina Cornaro section, the Treasure of the Cathedral and the Eleonora Duse and Freya Stark section (second floor).