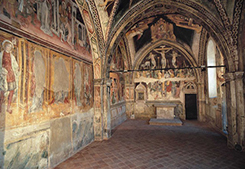 ORATORIO  DEI BATTUTI, was built at the end of the XIII century by the school of the brotherhood called Santa Maria dei Battuti. The name of this laic organization comes from the practice they had: beat themselves with a bunch of ropes to expiate the sins of the world. Helping the poor was the mission of them. Inside is decorated with a marvelous cycle of frescoes made between 1429 and 1446. Enclose there was the hospital and the old School of Battuti, founded in 1313. In place of the old gate of San Lorenzo, we can see now The Clock tower, built in XVI century. In Tiziano Vecellio square stands Sarcinelli Palace, built in XVI century, owned by the noble Cornelio Sarcinelli, who married Lavinia, the daughter of the famous painter Tiziano. Passing the clock tower, we find Piazza Foro Boario, originally called “Prato di San Marco” for centuries it was the seat of the market, mainly cattles, outside the walls of Serravalle.