ALTARPIECE WITH CHRIST CRUCIFIED AND THE SOULS OF PURGATORY

Apart from the novelty, not to say rarity, of the theme of the crucifix imaged, for example, in the painting with Saints Mary Magdalene, Antonio and Valentino, the membership of the altarpiece is confirmed, as well as by the type of faces of the souls of Purgatory and little angels, even from their arrangement according to patterns easily found in other works of the Belluno period.

In fact, the first soul on the right raises the right arm and holds the left hand to the chest in the same way as the woman, symbol of Ercole’s pleasure at the Fulcis crossroads.The motif of the naked soul brought into heaven by the angel appears almost equal in San Gregorio and the souls of Purgatory, painted for the church of San Alessandro della Croce in Bergamo. 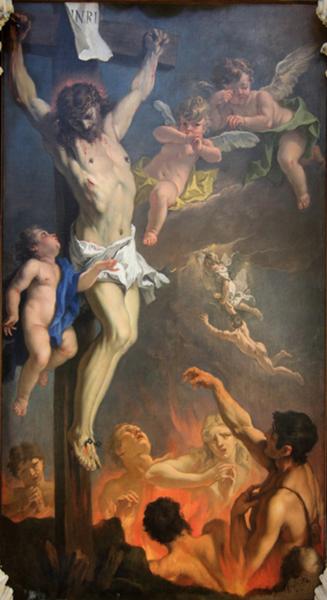