ALTARPIECE WITH THE SAINTS ROCCO,SEBASTIANO AND FABIANO

The altarpiece with Saints Rocco, Sebastiano and Fabiano was painted in the second half of the 16th century by Jacopo da Bassano with the help of Pozzoserrato who added the landscape and the curtain in the foreground. Coming from the church of the Benedictine nuns of Ognissanti in Treviso, it is now kept in the Museum of Santa Caterina in the same city. The background of the painting appears to be a hilly landscape crossed by a small river with a large reddish bridge. In the foreground are the three saints: on the right S. Rocco with a white sock on the left leg, while the right is injured at the height of the thigh, a red cloak on the legs, a black hat and a thick beard, S. Sebastiano is tied to a column with an arrow impaled on the left thigh, while S. Fabiano, seated, is dressed in a long red cloak and a long white robe. Behind him there is an altar boy who holds a long cross. The message that Jacopo da Bassano wants to give is an invocation in the hope of removing the plague. 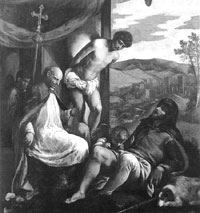 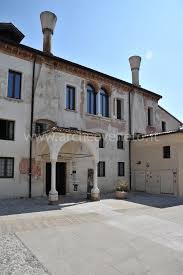