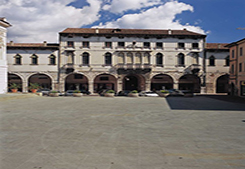 PALAZZO MINUCCI-DE CARLO, the Palace, owned by one of the most powerful families of Serravalle, was built at the end of XVI century, following the will of Minuccio Minucci, a diplomat of the Holy See and even Zara’s archbishop. Nowadays hosts an eclectic collection of of Camillo de Carlo, a patriot and a secret agent during the First World War. Along this road, once called Cal Granda it is possible to admire some of the most beautiful noble houses in Serravalle, representing the period of the greatest splendor. In front of the palace, you can see Piazza Minucci, once called Wheat’s square, closed by Loggia dei Grani, where the covered market took place. Here stand also Lorenzo da Ponte Theatre. Of the initial construction only the facade survived.