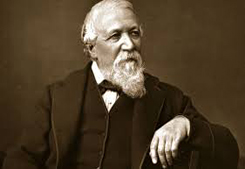 Born in London from a rich bourgeois family. In 1846 he fell in love with the poet Elizabeth Barret, with whom he fled to Italy.With our country and especially with what was the capital of the Serenissima, it had an early, intense and prolonged relationship.Browning owes much to the Veneto region and in particular to Venice. He first came to the lagoon city in 1838 and stayed there for a fortnight, staying at Casa Stefani, near San Marco.

He was 26 years old and was elegant, good-looking (a little dandy) and was writing Sordello, a figure re-enacted by Dante in Purgatory. In difficulty on how to complete the composition, he wanted to visit the Venetian places connected to his character Mantua and here he is in Treviso, Asolo, Bassano, Padua, Vicenza and Verona.Of the cities in the Veneto hinterland visited on this first trip, above all, certainly Asolo was to strike his imagination. An American painter had brought it to the hills of Asolo.A few days earlier, as a pioneer, he had arrived there, walking from Venice with a panama on his head, a pair of mountaineer boots and a handkerchief around his neck to hold back the sweat.

To Browning the Asolan beauty must have probably unleashed in the soul a feeling of euphoria and then of intoxication: he had before his eyes the vision of a country flexibly lying on the slopes of the hills like Naiade sculpted by Antonio Canova on candid marble.That first vision turned into him in a recurring dream, in which he saw himself with a friend walking towards Asolo, but where he could not reach and stop.Back in England, he finished The Sordello and in 1841 he wrote the poetic drama Pippa Passes. Pippa is a silk spinner that sews with joyful naturalness dramatic stories set in the land of Asolo.When Elizabeth died Browning returned to Venice in 1878. From 1883 she enjoyed the generous hospitality of Mrs. Bronson, an American “expatriate” who lived in Casa Alvisi.Mrs. Bronson bought a house, “La Mura”, also in Asolo, conquered by the beauties of the town just after reading Pippa.

In 1889 at “La Mura” Browning went to a cup of tea every day, during his stay asolo.In this period, the poet lived in the villa Scotti Pasini, in whose vast garden introduced the cypress, which since then – says Comisso – became the decorative tree of all the gardens of Asolo.Under the enchanting influence of the place, Browning wrote”Asolando”, from the verb Asolare, which means “go get some air”, “have fun in the open air”: a poem in open dialectic with the romantics on the value of Imagination.