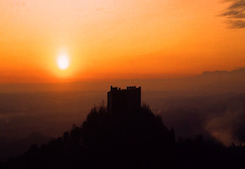 Built at the summit of Mount Ricco that overlooks the centre of Asolo, the mighty edifice in irregular polygon style of the fortress (average height 15 metres and a width of 2.5 metres for the north and west sides and 3.5 metres for the other sides) dates back to a period spanning the middle-end of the twelfth century to the beginning of the thirteenth century, as has been established by archaeological findings in excavations conducted by the University of Padova. This is the period in which the ancient settlement acquired greater importance and therefore built itself a more imposing defensive structure. The construction of the fortress entailed the destruction on the one hand the residential area – formerly productive on the other a number of graves from the necropolis in the area. Traces of the initial habitation of the fortification (thirteenth century) are rather weak, but more evident are those linked to the successive eras of domination by the municipality of Treviso (1261-1339), Venice (1339-1381), Carrara (1379-1388) and Venice again (1388-1796). Between the thirteenth and fourteenth centuries there was the construction of a cistern-well for the collection of rainwater (still visible) and the arrangement of the south-eastern area with the construction of a bread oven. For the entire length of time between the settlement and 1510, the year in which records declare the fortress was used for warlike purposes for the last time, it housed a garrison of soldiers. The fortification started to fall into decay right back as early as the sixteenth century. In 1650 there was even an attempt to sell the Fortress by Venice for the, not very high, price of 320 ducats. The operation was suspended and avoided at the eleventh hour by the fervent desire of the Asolan community which loved that building having already become by age-old tradition an unimpeachable part of town life is still to be admired today. It almost guards and acts as custodian of the little village lying at its feet. From the buttresses of the fortress that underwent massive work to restore them in the 1980’s and 90’s it is today possible to enjoy a bird’s eye view and a 360° view of the horizon from the Po plain to the entire arc of the surrounding mountains. On clear days and with good light one can clearly make out the lagoon of Venice.

Audio for The Fortress of Asolo