The second column on the left of the church of San Nicolò is entirely frescoed by Tomaso da Modena with two panels: San Romualdo and Sant’Agnese and the Redeemer, towards the nave, instead, we find San Girolamo in the studio.In a study described in detail both in the furnishings and in the hosted objects, San Girolamo is seated and his hands resting on two of the many books that crowd the room. The is skillfully portrayed with perspective reliefs and with the play of thereproduced shadows that will constitute the great innovation of painting.On the opposite surface of the same column, we find San Romualdo in the chair with at his feet the portraits of the patrons, from the arm of one of which hang a pair of handcuffs of the time and a skeptical Giovanni Battista, wrapped in a green mantle; finally Sant’Agnes is depicted with a white and blue bipartite dress of refined elegance. 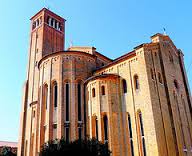