The Stories of Sant’Orsola were dipicted between 1355 and 1358 in a chapel of the church of Santa Margherita degli Eremitani in Treviso. The frescoed panels were arranged on the side walls and on the back wall above the altar.The subjects represented are: the sending of the ambassadors of the king of England, the ambassadors to the king of Brittany,the communion of Orsola from the mother, the baptism of the prince of England, the navigation to Rome, the meeting of Orsola with the Pope, the Pope’s dream, the Pope’s resignation to the papal throne, the departure from Rome, the return to Cologne the martyrdom of Orsola and Vergini.The dramatic story is made by the painter with a lively participation describing, carefully, the female profiles, the poses, the details of the clothing and the setting. 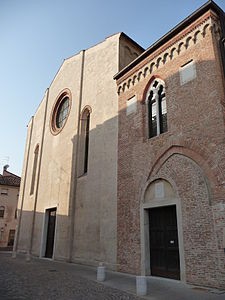