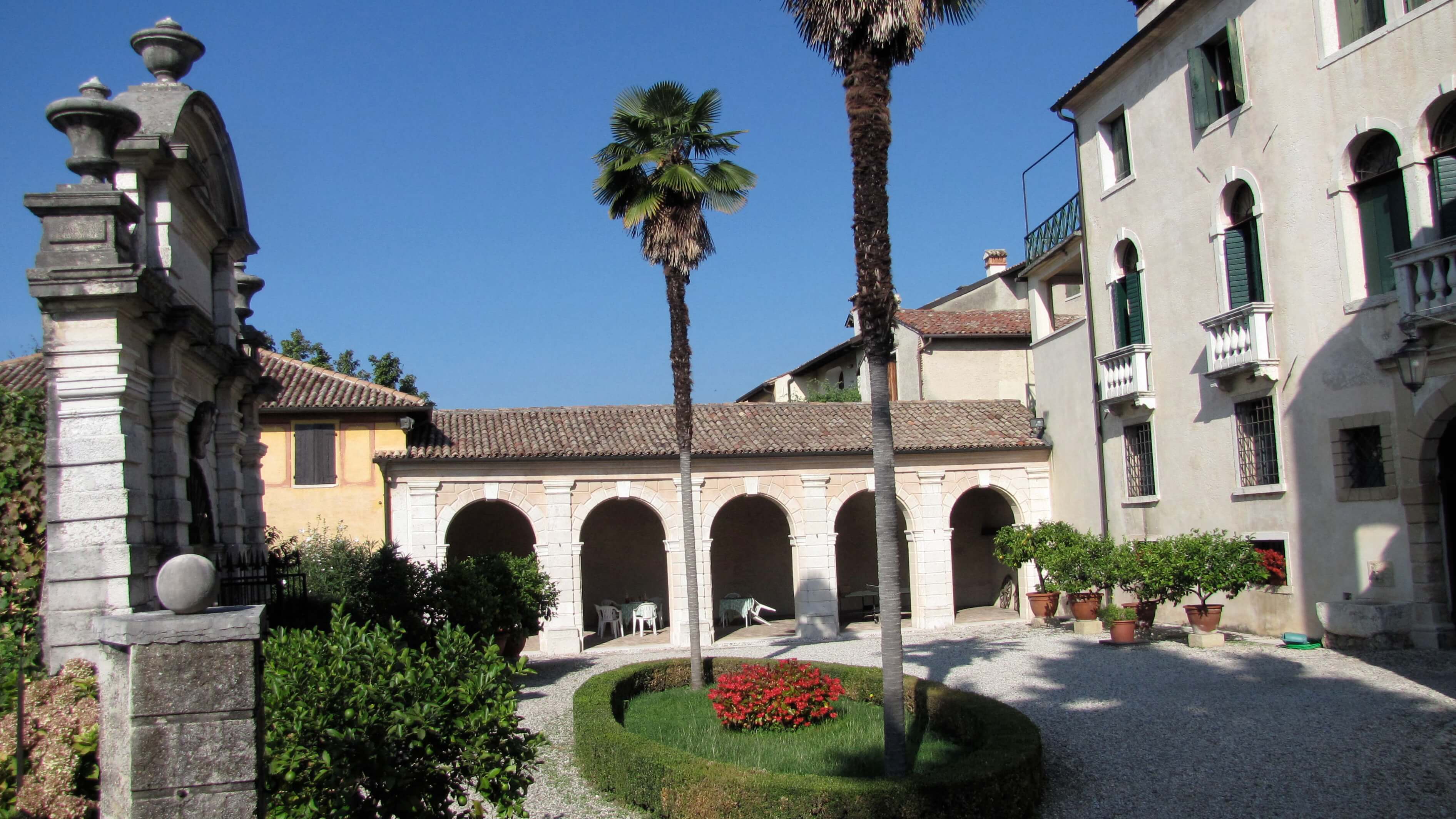 When you enter the splendid ancient town of Asolo you see Villa Fietta Serena. It stands in a large park, which slopes gently down to the south, where the remains of the Roman Theatre are buried. A tree lined avenue leads to an impressive ashlar entrance gate decorated with the coat of arms of the Fietta family, which opens onto the garden in front of the villa, with two barchessas and the guest quarters built at right angles to it; an archway by the eastern barchessa leads to the side garden. The building is very articulated in style, with the most impressive façade being to the north along the road. In 1576 the Counts Fietta bought three medieval buildings and a tower next to the town walls, and thanks to the renovation work by Giorgio Massari in the middle of 1700, they are now part of the complex we can see today. The park extends up the hill and was bought during 1800. The barchessas are also from a later period, and were added in 1840 to a project by Antonio Zardo. The main building is on three storeys and the rest is on four, with the barchessas just on the ground floor. The north and south façades of the villa are very similar and divided in three sections. Unlike the one overlooking the courtyard, the one overlooking the road is L-shaped: on the ground floor there is an ashlar arcade with three arches which leads into the building; on the piano nobile there is a central Serlian window with trabeation arch openings at the sides, all with stone balconies; on the second floor the regular windows conclude the façade. The western barchessa has a wide gallery on columns decorated with genteel ashlar work, with the guest quarters at the end; the eastern barchessa used to be the stables and is broken up by ashlar arches, all bricked up except one which leads to the minor garden.

The interiors repeat the triple division shown in the façade; from the central entrance hall, with five precious statues attributed to Orazio Marinali, with architrave doors that lead to the side halls and precious stuccowork on the ceiling, you reach the stairway situated between the two west rooms. On the upper floors there is the beautiful stucco hall, made in 1750 by Giovanni Savono, refined decorations and terrazzo floor in the hall on the piano noble, which is entered through two stone arches with keystones. Occupied by the Germans during the Second World War, a detective film and an advertising spot were recently filmed there; it is now open for shows and cultural events, especially during the summer.

The Landlord’s house is open at land floor and at main floor.

To leave your review to Palazzo Fietta Serena, click here