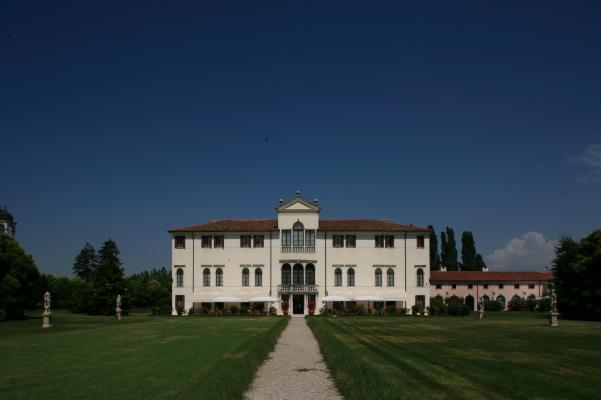 The villa, barchessa and noble church stand at a short distance from the historic centre of Portobuffolè in the province of Treviso.  The entrance gate is held up by columns surmounted by statues and leads to the attractive lawned garden that is bordered by a backdrop of cypress trees, with a pathway passing through them flanked by baroque statues that lead to the water door, an architectural entrance that originally gave mooring for boats on the Livenza River, which has now been diverted.  The complex was built around 1695 for the rich Tuscany family Cellini, who shortly after handed it over to the historic Venetian dynasty Giustinian dei Vescovi.  The master house is a square three-storey building with a classic, simple façade. Double-openings, evenly symmetrically spread. The central part of the façade is underlined by the long balcony with a stone column balustrade, with a rounded arch triple-lancet window defined by narrow pilasters; on the second floor there is a balustrade and three other large openings, just the central one being arched. Above the raised gable the crowning has small stone urns at the ends. The window on the piano nobile has refined mascarons on top and short moulded coping above.  The rear façade is the same as the main one, with two striking trumpet chimneys at the ends. The outhouses include the large isolated barchessa with an arcade that develops along two sides of the building and the baroque chapel to St. Theresa, which does not belong to the villa, and which has a lovely classic façade, two airy small bell towers to the rear and rich interiors, softened by stuccowork, marble and paintings, like the one on the ceiling by Domenico Fabris.  After entering the luminous entrance hall in the villa, the scenographic central stairway leads to the large hall on the piano nobile and the secondary side rooms. All the interiors are embellished by lively decorations: frescoes from early 1700 by the Veronese School on the stairway and in the hall, with allegorical scenes and illusory architectural views, delicate pastel shades; in every room there are virtuous baroque stuccos by G. Papa (like the exquisite high-relief transoms), and Venetian terrazzo floors with geometric patterns.  In the past the Imperial Austrian family, illustrious personalities from the Church, the Republic and the States that the doges had affairs with all stayed there.  After very precise restoration work the complex is now an elegant hotel and restaurant, and congresses and cultural events are held there.

Cuisine in the Villa has earned itself a place of honour among the best in gastronomy in the ‘Marca Trevigiana’, with its excellent chefs, who skilfully and lovingly recreate traditional local dishes to delight guests with the flavours, odours and pleasant emotions which are reminiscent of the original hospitality of the Venetian mansions.

The villa is surrounded by a large Italian-style park where you can walk among the green trees and antique statues, to the ancient port of Portobuffolè.

The beautiful heated swimming pool of Villa Giustinian has a whirlpool and a spacious relax area. Immersed in the green of our park, offering the chance to enjoy the tranquillity and the summer sun, away from the chaos of the city. Open from May to September.

JOIN IN THE VILLA'S SITE