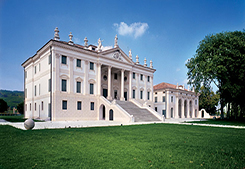 Surrounded by vineyards, the splendid Villa Spineda stands out in all its beauty and majesty. Its original building was commissioned by Marcantonio Spineda to the architect Giovanni Miazzi in 1753, but the design was then modified by Francesco Maria Preti in order to achieve more control of the proportions. The three-story Villa opens with a pronaos, surmounted by a gable and topped by three statues, decorated with the Spineda family crest. The two side wings have a facade embellished with pilasters, among which there are three series of windows and flanked by two airy Barchesse, which feature three central arches and two tiers of windows. The arches are divided by semi-columns with capitals, which support the trabeation, on which the keystone is welded. The garden that precedes the entrance is surrounded by tubs for the channeling of water, while the back moves towards the slopes of Montello. Taken over by the Benetton Group, it has been completely restored by the architects Afra and Tobia Scarpa and Prof. Mora. Currently it’s the headquarters of the Veneto Banca.