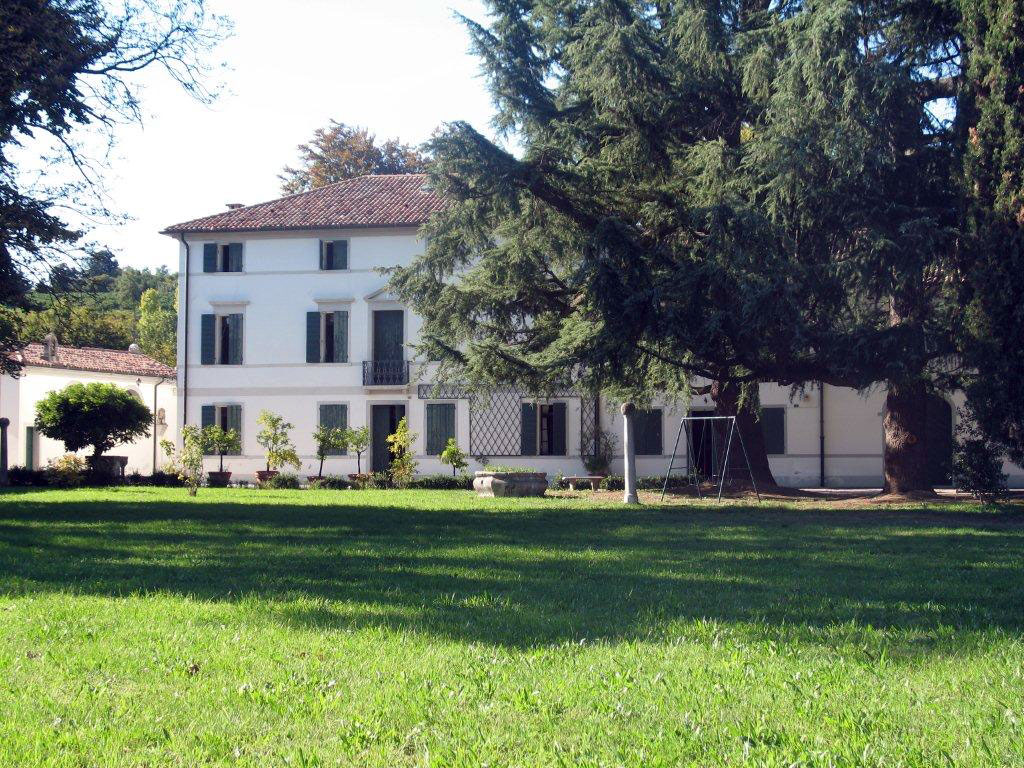 As with other Villas of the Treviso area dating back to the XVII-XVIII Century, the name of the architect or the precise years of construction of Villa Wassermann are unknown.

However, documents and mapping records allow us to reconstruct parts of its history from the second half of the seventeenth century. This period is characterized by the symmetry of the main facades, the arched windows in particular, while the central ones are dominated by a triangular gable and embellished by wrought iron railing.

The rest of the building that faces east was built at a later time, mostly in the 19th century, and was intended to support the agricultural activity up to the 1950s.

The first map in which we see the Villa dates back to 1670. It mainly concerns the Brentella Canal and the mills that exploited the driving force of the building; even though it’s a rough approximation it gives the idea of the magnificence of the building.

In the property valuation maps of 1680 and 1712, elaborated by surveyors Giovanni Battista Spinelli and Zuanne Rizzi on behalf of the town hall of Treviso, the Villa’s design is much more significant. At that time the Villa was owned by Bartolomeo or Bartolamio Meneghetti, Notary in Treviso. In the survey of 1712, the agricultural area next to the villa owned by Meneghetti, is more extensive than the previous one, following the acquisition of land north of Via del Pigner (today the northern limit of the Vittoria Channel).

In the 17th and 18th centuries the Meneghetti family, owners of a sizable amount of land and peasant houses in Giavera, Bavaria and Nervesa, made use of the building complex and turned it into an actual agricultural holding.

The map of the Napoleonic land register (1808) records the addition of two rustic annexes detached from the building, one of which corresponds in part with the current one, while the other, located on the east side, no longer exists. The document also confirms the expansion of the property north of the villa until “Stradon del Bosco” and to the east, on the left and right of the Giavera stream, up to the present borders.

In the map mentioned above there is also the little church, named Madonna della Salute, which was built in 1716 by the Certosini Monks and acquired in 1750 by the Meneghetti family. In 1836, because of an outbreak of cholera, the Oratory was named after the “Madonna della Salute”. The register (“Sommarione”) confers the property of the Villa and adjacent land to Don Luigi Meneghetti, who had inherited them from his father, Bortolo, in 1799.  The Meneghetti property was passed from hand to hand until the second decade of the eighteenth century, when it was bought by the very wealthy family of Sugana di Treviso and given in dowry to the Countess Paolina Sugana, who in February 1824 married a nobleman from Treviso, of Venetian origin, Stefano Galanti, owner of substantial real estate assets. After the death of the Countess in 1890, the property in Giavera was assigned to her daughter Letizia Galanti, who in 1874 married Carlo Vianello-Chiodo. From their marriage three sons were born: Domenico, called “Chino”, Elsa and Gilberto, who died in 1917, fighting on the Carso. After the Second World War, the Villa gradually lost its agricultural-function, being used as a holiday home by the current owners. In 1942 the estate passed to the daughter of Elsa Vianello-Chiodo, Letizia, who married a Wassermann from Milan, owner of a well-established pharmaceutical company. From the groom’s surname and the name of the bride, the villa assumed the double name of Villa Letizia and Villa Wassermann. Letizia appointed as heir of the estate her nephew, Fabrizio De Martinis, which in 1977 carried out a restoration and dehumidification of the main body, involving the renovation of the plaster and, unfortunately, the elimination of the original decorations and stuccos. The Villa, the farmhouse, the rustic annex, the chapel and the surrounding land were purchased by the Municipality of Giavera in 2006 with an investment of 1.800.000 Euro. In 2011-12 the chapel was restored, mainly the interior, decorations carried out by Dr. Pierluigi Sanzovo of Giavera.

At the same time, the municipal administration of Giavera implemented a very important  restoration intervention and functional recovery of both the Villa, the Barchessa and   the Custodian’s house, making these spaces usable for cultural, social and recreational activities.